Applejack is the middle sibling in the Sweet Apple Acres branch of the Apple family in Ponyville. Being the other sister of Big McIntosh, older sister to Apple Bloom, daughter of Pear Butter and Bright Mac and granddaughter of Granny Smith, Applejack is a kind, mature, sweet and caring young woman with a big heart.

As a child, Applejack left her farm to live with the Orange family, a family related to the Apple family in order to find her true calling. Although she was treated very well by her relatives, she simply didn't fit in. On the day of the Sonic Rainboom, Applejack realized her true calling and traveled back to Sweet Apple Acres.

Applejack was the granddaughter of Granny Smith and sister to Apple Bloom. She worked at Sweet Apple Acres and often invited her friends over.

According to Pinkie Pie, Applejack's apples made the best Apple cider[1]

During a hoofwrestling match, Applejack was almost defeated by her greatest rival, Rainbow Dash, that is, until she decided to temp Dash with a little cup of Apple cider, distracting Dash so she could come out as the victor.[1]

While hanging out with Twilight Sparkle and Pinkie Pie, Applejack was caught in the flurry of Pinkie Pie's chaotic "Pinkie Sense", causing it to rain flower pots. Thankfully, Applejack managed to dodge the pots, but when Pinkie Pie began to act up once again, she grew worried. Thankfully, she made it rain "something good", that being cupcakes instead.[2]

Later, Applejack wanted to go mountain climbing with Rarity, but Rarity refused, as it be "uncouth".[3]

While Twilight felt annoyed that Pinkie Pie refused to talk to her, she traveled to Sweet Apple Acres to visit Applejack. Twilight asked Applejack if she needed any help, but the Earth Pony awkwardly claimed that she didn't need any help, but tried to remain polite about it. Twilight kept trying to converse with her friends, only to get more-or-less the same results which caused her to grow depressed. Thankfully, Rainbow Dash flew Twilight to a party dedicating the 50th day after her birthday, with all of her friends there. Applejack told Twilight that she loved her as they ate a cake with her face on it, Though Twilight deduced this was all a means just so Applejack and Pinkie Pie could party.[4]

Applejack "couldn't wait" to eat cupcakes when she arrived at Pinkie Pie's free cupcake giveaway at Sugarcube Corner. The giveaway soon became a disaster when Pinkie Pie kept eating her friends cupcakes, however. Despite this, Applejack couldn't stop laughing when Rainbow Dash bit on her hoof and flew chaotically through the air in pain. After Pinkie stole Fluttershy's cupcake, she stole Applejack's cupcake to give to the now traumatized Fluttershy. After Pinkie decided to just pool everyone's dessert together, Applejack unenthusiastically said that she guess it would work.[5]

After getting an invite to go to the Grand Galloping Gala from Princess Celestia, Applejack was excited at the prospect of eating all the food, but Rarity grew angry at her and her friends for not calling about their fashion. Applejack helped with the clothes by bringing supplies to Rarity as she passed out, but Rarity just used her magic to create stunning clothes for her friends instead. Applejack went to the gala adorned in green cowboy boots with red markings, which caused all the heads to turn.[6]

Applejack had a wacky and zany personality. Like her friends, she was very extreme but also very kind-hearted and loving. Though she was short tempered, but loved her friends dearly, as shown when she had a falling out with Twilight Sparkle, but quickly buried the hatchet and apologized to her friend. She was a skilled cook but was somewhat insecure in some of her other abilities. She was protective over her sister and faught to defend her from a pack of Timberwolves. 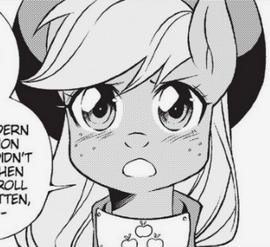 Applejack-san, also known as Applejack-oneechan by Apple Bloom was a ninja and member of the Apple clan. A resident of Ponyville-cho, Applejack-san was a highly educated young woman who began to question the way too specific prophecies of her family.

Applejack-san was the younger sister of Big McIntosh, older sister of Apple Bloom and the granddaughter of Granny Smith Obaasama. She went to school at Ponyville-cho High School in Ponyville-cho where she befriended Rainbow Dash-chan, Twilight Sparkle-san, Rarity, Fluttershy and Pinkie Pie. When the kaiju Spikezilla, she blamed herself and equipped her Magic Wand and attempted to face the creature...but was flicked away and smashed through a wall.

She later tried to convince that Twilight Sparkle-san was the heroine, given her uncanny resemblance to the effigy on her wand. Though Twilight refused to take it on the grounds that she didn't notice any resemblance, Applejack eventually got her to use it, though even then, Twilight didn't want to do anything due to the creepy expression of the wand. Applejack soon convinced her that saving the city was a bit of a higher priority than that, though when Twilight finally figured out how to use her magic, she ended up getting flicked through a wall like AJ was.

However, Applejack and the support of the others was able to create the Super Ultra Mega "Friendship is Magic" Ponyzorg to fight the monster. However, before they could fight it, Princess Celestia got Discord to stop his fun and turned everything back to normal and everypony went out for Sushi. 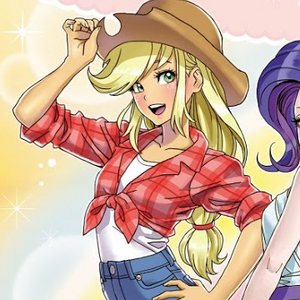 Applejack was a rustic female.

Applejack was a toy in the second wave of the Bishoujo Statues line, revealed in the February of 2019Template:When, along with Rainbow Dash and Rarity

Retrieved from "https://equestripedia.org/w/index.php?title=Applejack_(Friendship_is_Magic)&oldid=41679"
Categories:
Cookies help us deliver our services. By using our services, you agree to our use of cookies.