Lyra Heartstrings was a unicorn mare who spent her childhood in Canterlot, but later moved Ponyville in her adult life. The wife of Bon Bon and an agent of S.M.I.L.E., Lyra was an intelligent, loving, compassionate, eccentric, enthusiastic and energetic mare who loved to tell stories, sit on benches and party.

In her early life, Lyra lived in Canterlot and was educated at a series of high-end schools, such as the ol' Science Lab at Princess Celestia's School For Gifted Unicorns. At these schools, she would befriend Minuette, Lemon Hearts and Twinkleshine. During her young adult years, Lyra would often go out to eat with her friends, including Twilight Sparkle and Moon Dancer, both of whom she grew a small friendship with.[1] Lyra may have been a linguist, as she took a class on Ancient Languages.[2] 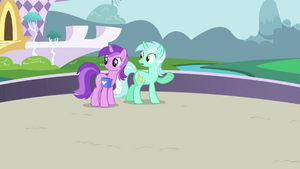 Lyra when she still lived in Canterlot

Lyra moved to Ponyville at some point after Twilight did, but often visited Canterlot to be with her friends.[1] As a civilian, Lyra developed a love for sitting on benches[3] and various athletic and cultural activities, such as participating in the Running of the Leaves[4] and going to fashion shows.[5] Lyra had a strong appreciation for cultural events, going as far as attending the Young Fliers competition, despite it being difficult for non-pegasi to travel to the coliseum, as it was made of clouds.[6]

Back around this point, though she and Bon Bon would often appear near together, they rarely interacted, and often appeared at events without the other, such as when they both visited the Ponyville Schoolhouse talent show[7] and one of Rarity's fashion shows, but not as a pair.[8]

Lyra participated in many town events, showing that although she had recently just moved to Ponyville, she quickly became a member of its community. For her first Nightmare Night in the town, she dressed as a mummy and was among the ponies scared of Princess Luna, believing she would eat her.[9] She also attended the Sisterhooves Social as an audience member and celebrated when Berryshine and Piña Colada won the event.[10] Lyra appeared to look up to heroes and greatly respected heroic acts, as she was among the ponies who celebrated Rainbow Dash and later, the Mare Do Well's heroic acts.[11] 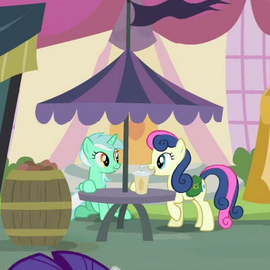 Around this time, Lyra had her first known major interaction with Bon Bon, though they often appeared in each others vicinity beforehand. The two appeared to have a conversation near a well when Derpy popped ut of the well, ruining the moment.[12] However, they still appeared at events separate from one another, which could be seen when they attended the play The Founding of Equestria, but in different areas[13] or when they both waited grew interested in the Flim Flam Brothers apple cider, but at different locations.[14]

Sometime later, Lyra may have lost a loved one, as she appeared at a funeral hosted by Mr. Waddle.[15]

A little later, Lyra had her next major interaction with Bon Bon as the two locked hooves and sung Smile.[16] The two appeared to be truly becoming friends around this time, and ate lunch together a few days later near Ponyville market street, though Lyra seemed quite annoyed that about how much time Bon Bon took to get to her.[17]

During the Invasion of Canterlot, Lyra, or potentially a changeling in her guise appeared as one of Queen Chrysalis's "bridesmaids". It was unclear what the real Lyra was doing during this time, but she was seen running from a changeling.[18]

Both she and Bon Bon attended the Coronation of Twilight Sparkle.[19]

This character history section is a stub. You can help Equestripedia by expanding it. needs info from Lyra and Bon Bon: Agents of S.M.I.L.E. and episodes past "Slice of Life" 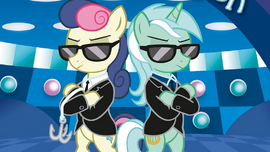 Lyra first came in contact with the world of S.M.I.L.E. on the day of Cranky and Matilda's wedding where Bon Bon broke down and finally told her that her birth name was Sweetie Drops and that she was a secret agent of S.M.I.L.E., though Lyra was initially saddened that her friend lied to her, she quickly realized that she was still her friend and the two reconciled before the wedding began.[3]

She and Bon Bon would later go on a mission to to save the universe from total destruction when Dr. Hooves time machine went haywire and nearly collapsed the timeline.[2] 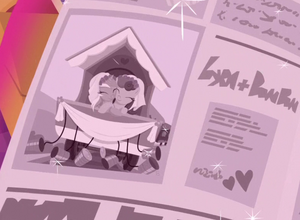 After years of being in love, Lyra finally proposed to Bon Bon. Much to her joy, not only did Bon Bon say yes, but she was also about to propose to her. Coincidently, the two proposed to one another on the same day both Big McIntosh and Sugar Belle proposed to each other.[20]

However, before they could get married, the Legion of Doom, now with Discord's power, attacked Equestria, nearly conquering the realm. Lyra took refuge in the School for Gifted Unicorns, but came to Equestria's aid as she fought alongside her fellow Equestrians to save the kingdom. In particular, Lyra and ther unicorns, including her good friend Twinkleshine, used their magic to create a forcefield around the Mane Six and Spike, shielding them from total destruction by the legion.[21]

After The Apocalypse, the two got married, their marriage was reported about in a newspaper in Ponyville sometime before the Second Coronation of Twilight Sparkle. The two attended her second coronation with their friends and even after several decades, the two lived in Ponyville together.[22]

Lyra was an average sized pony with a minty green coat and mane, with golden-orange eyes with a similar colored magical aura.

Lyra was excitable and curious,[23] especially excitable regarding her friend Bon Bon[24] and curious enough to sit on benches in a unique way that she found comfy[25] and she was apparently by far the most curious about Twilight's adventures.[26] Lyra had a strong sweet tooth, which was one of the factors that lead her to befriending Bon Bon.[27]

Lyra was incredibly enthusiastic, eccentric, and apparently improvident. According to Bon Bon, her "voice of reason",[28] being friends with Lyra causes ponies to develop a strong degree of patience[29] She was nevertheless, loving and compassionate,[30] but was quick to annoy, especially by ponies such as Pinkie Pie.[31] Lyra loved to tell stories, especially about Pinkie Pie, and often distracted ponies by doing so.[32]

Lyra was related to a family of unicorns that inhabited the Canterlot-Ponyville area since at least the Age of Heroes. Very little of Lyra's family was known, but apparently they visited Ponyville when she was very young, which was where she first met Bon Bon, but didn't remember her until years later.[33] 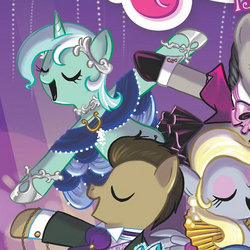 Lyra appeared in several comics, but only played a major role in a few. In Guardians of Harmony she aided Twilight Sparkle and later helped save Bon Bon from being attacked by a changeling

A few covers depict Lyra as being a member of the "Background Six", see here for details. 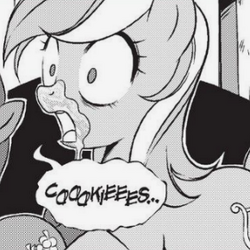 Lyra Heartstrings is a prominent background character, major enough to play major roles in a handful of stories and appear in countless episodes and comics.

Her given name is a pun on the musical instrument lyre, while her surname is derived from the slang "heartstrings", often used in the context of something that makes someone feel sad.

Lyra's voice was portrayed by Britt McKillip until "Slice of Life", after that, Ashleigh Ball began to portray her.

Lyra was heavily speculated to be a lesbian due to her constant appearances with Bon Bon. She was, eventually, confirmed to be LGBT (though whether or not she was a lesbian or bisexual was yet to be confirmed) and she proposed to her "best friend" Bon Bon during "The Big Mac Question".

Lyra is noteworthy for having among the most consistent personalities of the background characters. She was almost always appeared in crowd shots for fashion and sport shows, solidifying her interest in said fields and was generally depicted as being friendly, kind and a bit cowardly in various episodes, but was brave when her loved ones were in danger.

Lyra is a member of the "Background Six", a fan-term referring to the group of the most prominent background characters, members of which are major enough to the story that they sometimes have major storyline roles, but are still generally background characters rather than side characters. Other members of the group include Derpy, Octavia Melody, Dr. Hooves, Vinyl Scratch and of course, Bon Bon. Though this initially began as a fan-term, it has been referenced in official material and the group were seen together on an alternate cover to Friendship is Magic #10.

Retrieved from "https://equestripedia.org/w/index.php?title=Lyra_Heartstrings_(Friendship_is_Magic)&oldid=40091"
Categories:
Cookies help us deliver our services. By using our services, you agree to our use of cookies.