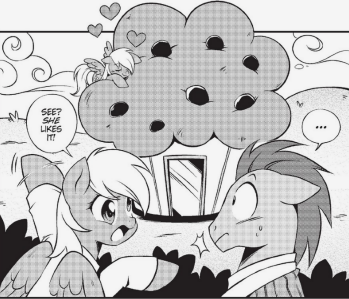 The M.U.F.F.I.N., or Multi Universal Flux Field Interdimensional Nexus is a time machine operated by Dr. Hooves and Derpy from an alternate universe.

At some point, Derpy made the machine look like a muffin, causing the Doctor much annoyance. Spike found the time machine when he was exploring the multiverse to find Pinkie Pie and enlisted the help of the two. Using the time machine, the two time travelers found his Pinkie.

Later, Derpy of the "main" timeline found the time machine and began to snuggle with it, causing the alternate Derpy to exclaim in excitement that someone likes the new design.

Retrieved from "https://equestripedia.org/w/index.php?title=M.U.F.F.I.N.&oldid=35064"
Categories:
Cookies help us deliver our services. By using our services, you agree to our use of cookies.