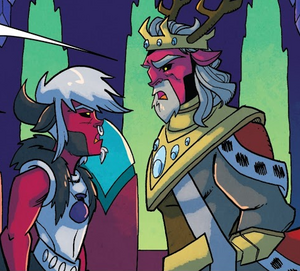 A centaur was a half-human half-horse creature. 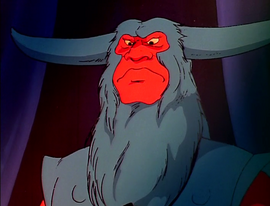 The only known centaur was Tirac, the demoniac being and dark planeswalker. Tirac hailed from an unknown region of Ponyland and ruled Midnight Castle, a kingdom under his complete control, where he used the power of the Rainbow of Darkness to convert the inhabitants into his minions.[1]

Centaurs hailed from the Infernal Lands, a kingdom ruled by King Vorak and Queen Haydon, a centaur and gargoyle respectively. Centaurs seemed to speak Common Equestrian, but with their own naming convention that often involved names ending with a "k" (Tirek, Vorak, Sendak). They appeared to be a largely peaceful civilization, with criminals such as Sendak being shunned by most residents.[2]

The centaurs had contact with Equestria and knew of Grogar[3] and Princess Celestia, but their relations were otherwise unclear.[2]

Tirek[4][5] and Sendak[2] had the ability to drain magic from their victims, becoming stronger as a result.

Centaurs are figures in the video game series, Tirek.[6]

The lower body of a centaur resembles that of a horse or pony, while the upper half resembles that of a human. The lower body is gray-furred, while the upper body sports black or dark gray fur and red skin. All Centaurs seen have white hair-including their Horse tails-and growths resembling horns or antlers on the sides of their heads. Centaurs also have black scales and yellow eyes.

Centaurs were creatures of Greek myth. Their appearance in My Little Pony media is likely a visual reference t the equine ponies, but also contain devilish or "demonic" physical characteristics, such as dark red fur and horns. The first centaur to appear in the franchise was Tirac in "Rescue at Midnight Castle", and so far, all centaurs in the series have direct connections to him and his family in some capacity. Centaurs first appeared in the series hen the series largely drew from European mythology to develop its initial setting.

Retrieved from "https://equestripedia.org/w/index.php?title=Centaur&oldid=33870"
Categories:
Cookies help us deliver our services. By using our services, you agree to our use of cookies.