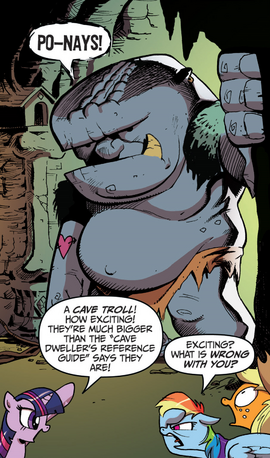 Trolls are a race of semi-humanoid creatures who live all throughout Equestria and the Mysterious South, though the overall features seem to vary on the type of troll.

It's unclear if every "kind" of Troll is actually of the same race or if "troll" is merely a blanket term to describe similar creatures. Only two "kinds" of trolls are known, - Cave Trolls and Slug Trolls, though the latter are of dubious canon, as they come from The Art of My Little Pony: The Movie from a storyline in the film that was ultimately scrapped, and they both have quite different looks. Cave trolls are huge, hulking creatures who live in caves and tend to live rather primitive lives. They are intelligent enough to speak the common language, albeit in a broken way make use of tools.

Retrieved from "https://equestripedia.org/w/index.php?title=Troll&oldid=19222"
Categories:
Cookies help us deliver our services. By using our services, you agree to our use of cookies.