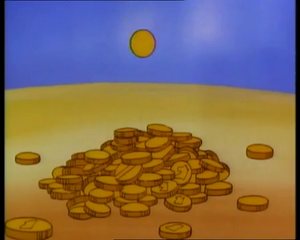 Jangles, a type of currency

Even in the fantasy worlds of My Little Pony, currency is needed to trade goods and services.

Currency can take many appearances, but is generally rendered as either metal coins or paper items. Examples of coin-based currencies include Jangles and Bits, while paper currency include Dollars. However, not all currency were formal creations created for commerce, to some cultures and even just individuals, currency could be something more nuanced or special. In Klugetown, scraps of metal just called "frags" were traded for goods and services and to a Crystal Pony named Amethyst Gleam, Rusty Horseshoes held special monetary value.

Generally speaking however, gold, silver and gems were all valuable and could be used or sold as currency in most realms. During the Era of Harmony, the Cutie Mark Crusaders used a gem to buy an industrial-sized pet hair dryer for just a small gemstone, meaning they were quite valuable.[1]

currency generally had two major purposes: To trade goods and services. Goods referring to things, such as food, vehicles, housing, land etc, while services could mean things such as spa services or going to concerts. Typically, individuals earned currency by working their jobs, for example, many students at Crystal Prep Academy worked at Canterlot Mall and nearby establishments, in places such as shops and restaurants. For extra money, individuals could provide non-formal services, such as car washing lemonade selling or similar things.

Currency could be used for quick rest, such as buying rooms in hotels or transportation by buying tickets at establishments such as train stations.

Although not explicitly so, many holidays and festivals at least partially revolve around currency. Perhaps the most blatant example would be "Hearths Warming Eve" and its human equivalent, "The Holidays", a holiday where people give gifts to one another. While the gifts can totally be created or even non-material in nature, many gifts were bought and sold from vendors.[2][3] A less popular but more economic holiday was the Rainbow Falls Traders Exchange, an event hosted in the town of Rainbow Falls where individuals were exchange goods and even animals.

A type of holiday involving the taxation of goods was called a "Tax Holiday", a specific Tax Holiday created by Applejack was called "Stink Rich Days", named after Stinkin' Rich himself.

Retrieved from "https://equestripedia.org/w/index.php?title=Currency&oldid=33820"
Categories:
Cookies help us deliver our services. By using our services, you agree to our use of cookies.