Applejack is the middle sibling of the Apple family, being the older sister to Apple Bloom and younger sister to Big McIntosh. She's the granddaughter of Granny Smith and close friend to the Humane Seven.

As a baby girl, Applejack would often play with her families pigs, which coined her the name, "Piggy Wiggly".[1] It's unclear what middle-school she went to, but she didn't know any of the other girls growing up. During her freshman year at C.H.S., she grew close to the girls,[2] but was eventually driven apart by Sunset Shimmer.[3] Applejack had a bad relationship with her cousin, Babs Seed, who acted as a faux-friend towards her, controlling her and never being there for her when she needed it the most.[2] 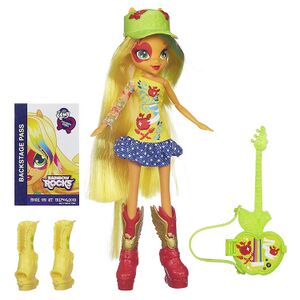 A toy released in the Rainbow Rocks line modeled after the Rainbow Rocks designs of The Rainbooms that was used on most merchandise of the time, and still used on some toys and books to this day. Featured a "stamp" feature and a guitar. The only other toy in its series was, fittingly enough, a Rainbow Dash doll. Template:--

Retrieved from "https://equestripedia.org/w/index.php?title=Applejack_(Equestria_Girls)&oldid=30477"
Categories:
Cookies help us deliver our services. By using our services, you agree to our use of cookies.