Racism in My Little Pony 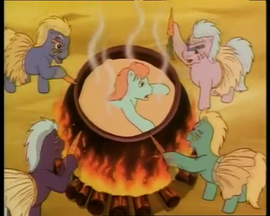 Patch's view of the Tropical Ponies

Racism has been a topic sometimes handled in My Little Pony, most commonly throughout My Little Pony: Friendship is Magic and its spin-offs. Throughout the franchise, different pony tribes or other species have often used to teach young viewers about the dangers of racism and the hatred, destruction and misery it could potentially cause.

Stories that most blatantly deal with racism are "Hearths Warming Eve", "The Lost Treasure of Griffonstone" and Friends Forever #14, which explored themes of nationalism, stereotyping and institutional racism respectively.

The episode "Ponies in Paradise" deals with racism brought on by inaccurate cultural depictions of other races. The Pony Pals believe that the residents of Tropical Island are savage cannibals due to stories they've heard, but once Bright Eyes visits the island, she realizes that those sterotypes couldn't be further from the truth. 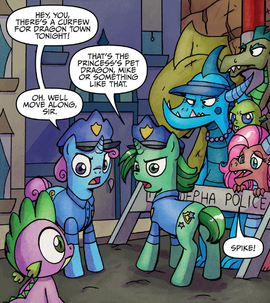 "Hearths Warming Eve" was perhaps the most nuanced story regarding racism, with themes that branched into various forms and practices of racism, such as nationalism and the self-destruction that absolute pride in ones nation combined with absolute hate in other nations can cause. The episode explored how the three (later retconned to be four with the Thracians) pony kingdoms, the Earth Pony Kingdom, Pegasus Kingdom and Unicorn Kingdom hated each other for petty aspects based off their tribe and other factors, only for their hatred for each other and sheer pride nearly kill all inhabits when they refused to share or trade food in a worsening winter.

However, they were saved when three kind-hearted members of each tribe befriended one another and helped bring about the end of the winter through their kindness, symbolizing that hatred only tears apart and destroys, and only love and kindness can repair such damage. Sadly, King Thrace was-at least by his own account-excluded from this newfound brotherhood, and led his own tribe away from the newly founded Equestria.

The next episode to deal with racism was "The Lost Treasure of Griffonstone", which was considerably less poignant and complex, though also didn't focus on it as much. In the episode, Rainbow Dash revealed her hatred from Griffons after her falling out with Gilda, and believed Griffons to be, in general, uncaring, cold, rude and mean-spirited creatures. However, Gilda still loved Rainbow Dash and risked her life to save hers, helping Rainbow Dash realize that Griffons weren't inherently bad creatures and so she reconciled with her friend.

Season eight's initial antagonist, Chancellor Neighsay, also displayed racist/prejudiced tendencies, most notably involving non-ponies enrolled in Twilight Sparkle's School of Friendship. He regarded non-ponies as dangerous to Equestria, and had no qualms about belittling them to their faces in public. Neighsay became convinced that Twilight's school posed a threat to Equestria, and later blamed the Young Six-five of whom were non-ponies-for the fading of Equestria's Magic. Ultimately, however, Cozy Glow proved to be the culprit, and the Young Six not only acted to stop her but also freed Neighsay after she imprisoned him, after Neighsay himself had imprisoned them. Neighsay thus saw the error of his ways and apologized for his previous actions and attitudes.

As for comics, Friends Forever #14 was probably the most blatant and in a way, the most shocking and adult look at racism. While Hearths Warming Eve was ripe with symbolism, it was ultimately fantastical in its approach and was told like a fairy tale. Friends Forever #14 on the other hand showed the more realistic outcome of racism. In its pages, Dragons, a minority group in Fillydelphia, were systemically targeted by the police and were treated with harsh laws when it was suspected a dragon was causing fires around the town.

Spike eventually discovered a Fire Snail was the entity causing the fires, and as he was about to report this, fires broke up around the city. With the help of the other Dragons, Spike was able to rescue countless ponies from potentially dying in the infernos.

My Little Pony Adventures described an episode idea in which the Mane Six would display potentially racist views on deer, which were based off Native Americans, when they tried to essentially kidnap a pony child who was raised by a deer family. It was implied they realized the error of their ways, however.

In recent years, the Brony fanbase became infamous for being a hotbed of racism, as well as other bad things, such as misogyny and homophobia. Several major pony forums and discussion sites have been hosted nazi pony OCs and nazi pony AUs, glorifying the nazi party with little to no moderator action in some cases.

In My Little Pony Adventures Laura Faust wrote two concepts which could be potentially racial insensitive. The first were beings called the "Diamond Dawgs", dog characters who wore chains and spoke like stereotypical "gangsta rappers". They were later scrapped and redesigned into the Diamond Dogs. The latter was a culture of "Native American" inspired deer written about in the above section.

Retrieved from "https://equestripedia.org/w/index.php?title=Racism_in_My_Little_Pony&oldid=35112"
Categories:
Cookies help us deliver our services. By using our services, you agree to our use of cookies.